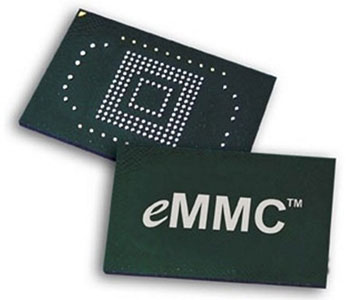 eMMC is a type of solid-state storage commonly used in smartphones and tablets. eMMC is an abbreviation of “embedded MMC”, or “embedded Multimedia Card”. To put it simply, eMMC is a non-removable memory card that is soldered onto a circuit board. If you see a phone with “16 GB memory”, that’s 16 GB of eMMC storage. Similarly, if you are buying a tablet, an ultrabook or a netbook, it will most likely come with built-in eMMC storage instead of a fully featured SSD drive.

The Difference Between eMMC and SSD Drives

SSD drives are as fast not because they are using a special type of ultra-fast flash memory. Instead, they simply read and write data from (or to) multiple flash cells in parallel. The ability to access data stored in multiple flash cells at the same time is what makes SSD drives so fast and so comparatively expensive.

As a result of these similarities, the eMMC storage technology employs similar measures to improve longevity (wear leveling) and performance (trimming empty cells by erasing them in background). However, unlike SSD drives, many eMMC controllers will not empty trimmed data immediately, probably because of lack of parallelism. In many cases, deleted data will remain intact even after the TRIM command has been issued; the cells are only erased later on. In addition, unlike SSD drives, many eMMC controllers will NOT return zeroes when accessing a trimmed, but not yet erased cell. It means that more time will pass between the moment data is deleted (and trimmed) and the moment the data is actually gone. This in turn may give a data recovery specialist some more time to recover accidentally deleted files.

Read more:  How to Secure Your Files Against Data Loss

So, we figured that eMMC memory is a cheaper, slower and non-removable alternative to SSD drives that is commonly used in phones, tablets and ultra-slim netbooks. Is it any different from SSD drives when it comes to data recovery?

The technology used to recover information from eMMC drives is similar to SSD – yet the applicable technique is very different. eMMC memory is non-removable and soldered onto the main circuit board, which makes it practically impossible to remove and attach to another PC. While many data recovery labs possess special equipment allowing them to connect to eMMC chips directly, this is definitely not an option for home or office users. As a result, if you are about to recover information from eMMC storage of your netbook or tablet PC, you’ll be limited to whatever means offered by your operating system. But even then, there are options.

We Only Deal with Windows Devices

Before going to the practical guide on recovering eMMC media, we must say that everything described below only applies to devices running Windows. Generally speaking, it’s applicable to any version of Windows, yet most devices you’ll find using eMMC memory are likely running Windows 8.1 or the slightly older Windows 8. However unfortunate it is, there is simply no reliable universal solution for recovering data from existing Android phones and tablets. There is absolutely no way to recover deleted files from iOS powered devices. Windows is a whole another matter. 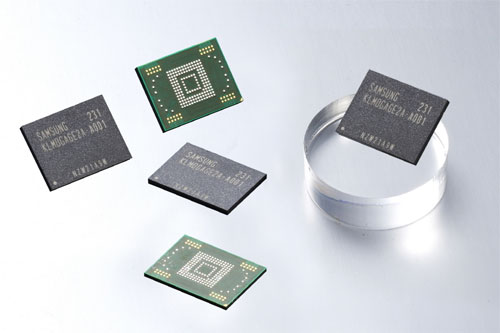 Recovering deleted files from an eMMC media is relatively easy. You’ll need to install a data recovery tool onto an external storage device such as a micro SD card if your device is equipped with a micro SD slot, or an OTG flash drive if your device supports USB on-the go (OTG). Alternatively, you can simply install the data recovery tool onto a network drive (share a folder on your desktop PC and map it as a drive letter on your Windows tablet; doing this is easy, but out of scope of this article).

You *must* follow the above instruction, especially because eMMC drives are typically much smaller than computer hard drives or your typical SSD drive. This means there’s less free memory available, which in turn means that the probability of new data being written to exactly those memory cells that were used by your deleted files is much higher than usual.

After installing a data recovery tool (such as RS Partition Recovery or the simpler File Undelete Software) onto a separate disk, you can launch it and run disk scan as usual. If your files are still recoverable, they will appear in the list of recoverable files. You can click on each file to see its preview.

If you applied a factory reset procedure to recover Windows, or if you reinstalled the system altogether, you have effectively wiped your personal files and folders. However, as you didn’t do anything to the original Windows partition, there is still a chance you’ll be able to find at least some of your files.

In this case, you’ll need the very best data recovery tool supporting low-level data carving: Partition Recovery Software. The reason for this is the fact that, after being freshly initialized, the file system retains no traces of your old files. As a result, the data recovery tool will have to read the entire content of the eMMC storage in order to detect and identify known types of file such as office documents, pictures, ZIP/RAR archives, emails and similar files.

You’ll need to follow the same precautions when installing the data recovery tool by using an SD card, OTG flash drive or a mapped network disk. After that, run the tool and scan the system as usual. If anything is found, the files will be listed and can be previewed as usual.

The most difficult case (yet the one that gives you a good chance of getting your files back) is corrupted file system or the state where Windows does not boot at all.

Think for a moment about the fact that an eMMC media is soldered to the circuit board. It cannot be removed and connected to another computer. You MUST boot the system somehow onto exactly the same device you’re about to recover data from. Challenging? Let’s solve it!

If you cannot boot Windows *and* you have important files sitting on your eMMC device (especially if those files were deleted and/or if you formatted the disk or repartitioned the storage), the worst thing you can do is recovering Windows from the built-in recovery partition. Granted, you *will* get bootable Windows and a working device; however, your original files will be most probably lost.

Instead, consider creating a bootable recovery media yourself. There are plenty of tools and tutorials to help you do that, even those provided by Microsoft (e.g. this article: Create installation media for Windows 8.1 , or this one if your system is working fine but you like to plan ahead: http://windows.microsoft.com/en-us/windows-8/create-usb-recovery-drive).

You’ll be able to boot from recovery media by accessing UEFI BIOS on your device and allowing to boot from an external media.