It’s not been long since the end of winter holidays we’ve got our first support call in the new year. “Hi”, the voice said. “I’ve just got a Christmas deal on a new 64-gig micro SD card. I used that card on a Christmas vacation and took more than a thousand pictures. Back home, I could only read the first 300 or so. The rest of my pictures come out corrupted. Can your software help?” 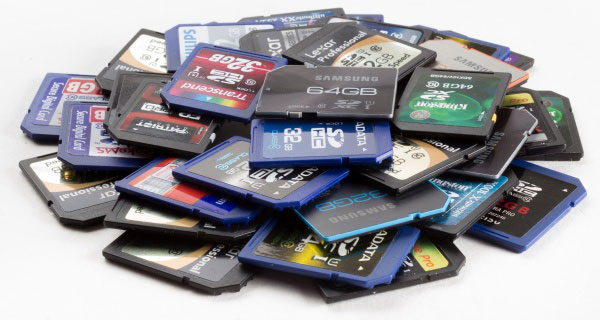 The voice didn’t sound overly concerned, so after a few questions about the memory card we informed the customer that what he’s got was a fake. “What? A fake? I bought it from Amazon!”

Sigh. We couldn’t do much to help the customer other than tell him he wasn’t the first or the last to be tricked with one of those sleazy dealers offloading fake memory cards with advertised capacity much higher than their actual storage. Indeed, his only recourse would be returning the card (with the cost of shipping being nearly half of what he paid for the card itself) and leaving well-deserved angry feedback. But all that won’t bring the rest of his photos back. Nothing can.

So what was wrong with that purchase? In this case, it was a combination of factors that switched off critical thinking and neglected due diligence: a reputable online store (but a purchase off Amazon Marketplace, of which many consumers are still not aware of, and from a sleazy dealer to boot), and all the Christmas sales around that taught consumers to expect huge discounts and make them hunt for deals.

What Are Fake SD Cards

But what was wrong with that memory card anyway? While it’s easy to say it’s a fake, it’s a bit more complex than that. There are fakes, and there are fakes. Sometimes, unscrupulous manufacturers will slap a label of a well-known manufacturer onto an otherwise very generic, inferior product. The majority of “free gift” memory cards buyers receive when ordering stuff from China fall into this category. These cards are typically using slow, low-grade memory chips, but their advertised capacity matches the actual storage capacity of the flash chip.

The second type of fakes is much more dangerous, as it will inevitable cause loss of data the very first time you fill it up beyond its actual (unknown) capacity. These fake SD cards have very cheap, small-capacity flash chips inside (usually 8 GB), advertising a much higher capacity of 16, 32 or 64 GB. What’s particularly bad about these fakes is that these cards are not simply mislabeled. Instead, their microcontrollers are re-programmed to trick the operating system to see the faked capacity. It’s also partitioned and formatted on a logical level to support the fake capacity claim. As a result, your computer, smartphone or digital camera will continue writing new data well beyond the actual capacity.

Read more:  Windows File Systems: What You Need to Know (and Why)

What happens to that data? The first 8 gigabytes (or whatever the actual capacity is) will be written to the card, and can be read back with no problem. As most users will only test their newly purchased card with 1-2 GB of data, the “test” will be passed, and the card put to service. The worst happens AFTER the card is filled up beyond its actual storage capacity. The modified microcontroller will continue accepting new data. However, it will NOT be written to the memory card. Instead, it’ll be cycle-fed into a few remaining flash cells from the reserve pool, overwriting the cells many times with newly fed data. As a result, if you try reading anything written onto that memory card beyond its actual capacity, you will be fed digital garbage (random data) instead of the data originally stored. This is what causes the loss of data, and this is why you can’t get it back no matter how good a tool you use to recover information.

How to Tell a Fake SD Card

How to avoid buying a fake anyway? Let’s take this “deal” as an example.

The card is advertised as a 64 GB micro SDHC card. With due diligence, it is easy to spot a fake right away: the combination of “64 GB” and “SDHC” is impossible, as all SD cards larger than 32 GB do, in fact, conform to the SDXC standard. As a result, any SD or micro SD card advertised as “64 GB SDHC” is a genuine, 100% fake.

Have a close look at one of the packaging: 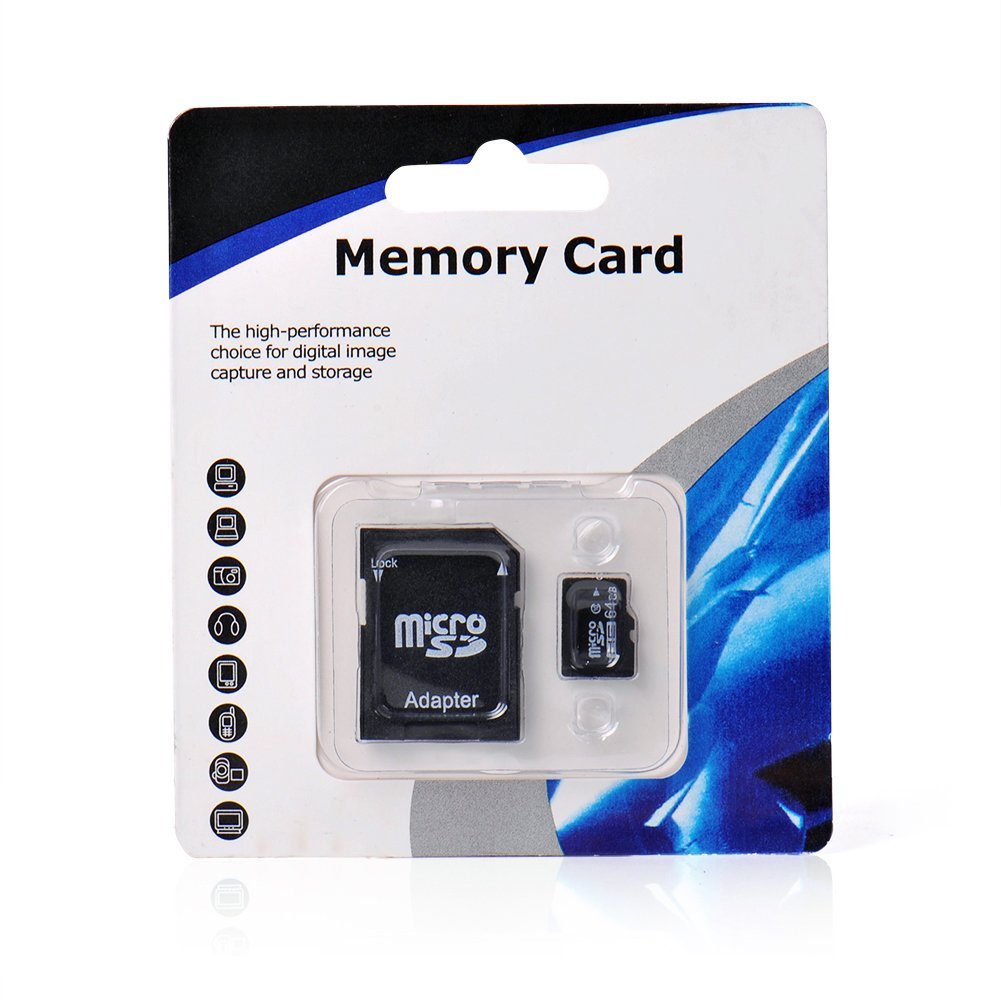 These cards are called by many names, sold by hundreds unscrupulous dealers locally and directly from China. But whenever you see a card packaged like that one in the listing, don’t walk but run away! These are 100% fakes.

But what if a memory card is advertised as “32 GB SDHC”, or “64 GB SDXC”, but it was still offered for a ridiculously low price? Or what if you’ve got a “free gift” memory card with your straight-from-China smartphone? It could be branded Samsung, SanDisk, or anything else; it could be genuine or fake. How can you tell for sure?

First, you can test the card by trying to write a large file on it. Typically, fake SD cards have really slow writing speed (3-7 MB/s, sometimes 11-13 MB/s, which is a much slower speed compared to their usually advertised rating of Class 10). This, however, is not a definite giveaway. To be really, really sure that the card you’ve got is not a fake with reduced capacity, you must run a dedicated SD card testing tool, and you must complete the full testing cycle (which, in the case of very slow cards, may take 12 to 20 hours). The tool in question is called “h2testw”. It was developed by Harald Bögeholz (Germany), and can be downloaded from his German home page or Softpedia . Don’t worry about the screenshots being in German, as both the English and German interfaces are available.

Simply download and run the tool, select your memory card and click Start. Wait till the scan finishes. The result for a good memory card should look like this: 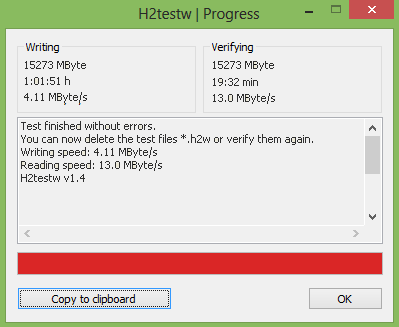 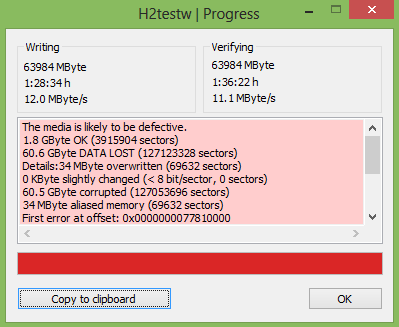 What should you do if you’ve got a fake? Report it immediately to the marketplace you’ve bought it from. eBay, for example, has strict rules regarding fake goods; you may not even need to ship it back to the seller (instead, you may be asked to destroy it – with a proof, or to ship it to eBay approved facility for an investigation). If this is not an option, return it back to the seller. DO leave a negative rating to warn others, as many buyers leave positive feedback too soon without fully testing the card first. These premature positive feedbacks feed the vicious circle, attracting more unsuspecting buyers to the listing of the fake. Don’t settle for a refund; do the right thing and warn the others!

Sometimes we’ve been asked this question: “Can I still use the fake memory card up to its actual capacity?” The short answer is NO. The long answer would be YES AND NO (you can use it for some time if you don’t care for your data). The faked microcontroller cannot and does not do any wear leveling (please refer to our previous article “Life Inside an SD Card: Storage Reliability and Recoverability” for more information); as a result, any attempt to re-write content on that memory card may result in corrupted data blocks. You may never notice them if you store large files such as videos; however, the more data you write onto a fake memory card, the more corrupted blocks you will get, and the higher chances of data corruption you’ll receive. Practically the only use for a fake memory card would be storing 8 GB of cartoons on it. But ask yourself a question: is it really worth it? You can buy a perfectly legit, genuine brand memory card for just a few dollars. Last time I checked 32 GB SanDisk SDHC cards were $11, and 64 GB SanDisk SDXC were under $20, sold directly by Amazon (and not one of their marketplace sellers). Is your data really worth less than that?